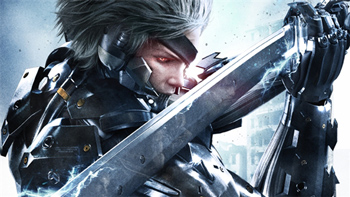 Could the DLC character be Snake? SNAKE? SNAAAAAAAKKKKKEEEEEE?

Kojima may have turned him into a break-dancing cyborg in Metal Gear Solid 4, but to many, Raiden is still the same mildly-grating, man-child who cartwheeled his way through Big Shell, thus ruining Metal Gear Solid 2 forever. Fortunately for them, Platinum Games has announced you can play as a different character in Metal Gear Rising: Revengeance, assuming you buy the post-launch DLC.

"Right now we don't have any plans for competitive online play or anything like that," Platinum Games producer, Yuji Korekado, told GameTrailers. "However, we do have plans for some downloadable content after the release of the game that will allow you to play as a different character or experience different types of missions."

So could the DLC character be aging mass-murderer, Solid Snake? Probably not, given that the last time we saw him, Snake resembled an extra from Last of the Summer Wine. One of the various robot ninjas who've cropped up throughout the series seems like an easy choice. Perhaps Grey Fox? Yes, he's dead, but Big Boss managed to turn up in MGS4 and he seemed remarkably well preserved for a man Snake has killed twice. It wouldn't be too much of a stretch to imagine someone scraped what was left of Frank Jaeger off of Metal Gear Rex's foot and put it through the clone-o-matic. Perhaps it could be one of Platinum Games' own characters, as the developer has no compunction about cross-pollinating its franchises.

Korekado also confirmed that the pony-tailed, sword-wielding antagonist who pops up in the games' trailer isn't Vamp from the previous Metal Gear games, just someone who happens to look pretty much exactly like him. Good to know.