Smoother story progression in Cyberpunk may appeal to a wider audience. 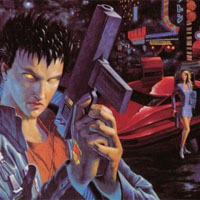 Cyberpunk developer CD Projekt RED knows its new game will be a challenge to develop but has said, in a Gamasutra interview, that lessons learned from its work on The Witcher will be applied to its latest project. The biggest problem is story; how much is too much, and what assumptions can CD Projeckt RED make about the player base? The Witcher 2: Assassins of Kings had been targeted at players who already understood the game world, perhaps even having read some of the novels on which the game was based. Players who didn't understand the game world ended up hopelessly lost. Studio head Adam Badowski now admits that this was a mistake, and wants to make sure that Cyberpunk doesn't overwhelm the players right from the start.

"What we learned from The Witcher series," Badowski told Gamasutra, "is that we need to attract people with a smoother learning curve when it comes to the storyline." That doesn't mean dumbing down the Cyberpunk concept, but it does mean that the player won't be slapped in the face with story detail as soon as they set foot in the game world. This will make the story more accessable to a wider variety of players, and hopefully bring in a larger audience than The Witcher generated.

The old pencil-and-paper Cyberpunk on which the game is based embraced that concept wholeheartedly. It might have been based on sci-fi novels, but you didn't have to have read every single one to understand the game. It was less about deep philosophy and mythmaking than it was about the look of the thing, how it felt and how you felt being in that world; style over substance. If CD Projeckt RED can manage even half of that, this should be an interesting game.