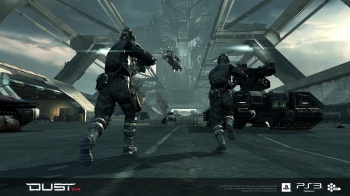 CCP Games has announced the real-world cost of a full set of high-end equipment.
Per Death.

Morgan Godat, Vice President of Art at CCP games, has announced that it will cost just 24 cents to equip your character with the best possible gear in Dust 514. But that seemingly low cost will multiply by the hundreds (or even the thousands, depending on the skill of the player) since a player loses everything each time they die, just like its tie-in game, Eve Online.

Fortunately, not everything is paid for with real money (represented in-game as "Aurum") as Eve's in game currency, ISK, can also be used to purchase equipment. Players are rewarded at the completion of each match based on their performance and the amount of gear destroyed. If they do well, then the reward should cover the losses. If they don't do as well, then purchasing Aurum might make things easier.

"One of the reasons we're having a really extensive closed and then open beta is that we need to work out exactly what [the pricing will be]," explains a producer of Eve Online, John Lander. So far, the current pricing model in place is getting positive feedback, but CCP Games is still unsure of what will happen once the two games connect.
As Lander puts it, "No one's ever done this before, never, ever, ever."

Dust 514 does not have a specified release date yet, but CCP Games is planning for it to connect to Eve Online's Tranquility server (the live server) by the end of the year.

Check out our E3 preview for more information about Dust 514's gameplay.