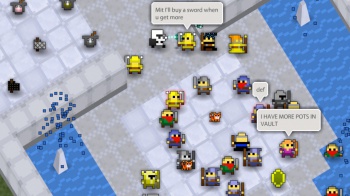 Kabam, a producer of free-to-play social games targeted at hardcore audiences, has acquired Wild Shadow Studios, developers of action-MMO Realm of the Mad God. The independent studio will be joining the ranks of Kabam's 450 staff members to continue improving the game.

The game, which Kabam's Game Studios president Andrew Sheppard describes as a "massively multiplayer bullet hell" shooter, has already found success both on Steam and in its browser-based version, though Kabam is interested in bringing the game to new platforms. Since its release in June 2011, it has attracted millions of players and received a nomination for Technical Excellence from the Independent Games Festival. Alex Carobus, founder of Wild Shadow Studios, is optimistic about the game's future, and looks forward to utilizing the new resources Kabam has to offer. "Look for tons of new content in the coming months," he says.

With a focus on player skill and cooperation, Realm seems to be right up Kabam's alley. In an interview with GamesBeat, Sheppard admitted that the game drew attention to itself because of how many of his own employees were playing it. "We think this is an incredible game," says Sheppard. "This is 100 percent in our wheelhouse."

Spry Fox, who designed the game alongside Wild Shadow Studios, has sold its ownership of the title to Kabam as well, and will be shifting its focus to other online games currently in the works. While the independent developer is not enthused to part ways with its project, it wishes the best of luck to Kabam and its new acquisition. Daniel Cook of Spry Fox is proud of the unorthodox game and thankful for the game's lively community. "We wish we could have continued to grow RotMG alongside you," he writes, "but we know we're leaving you in good hands."