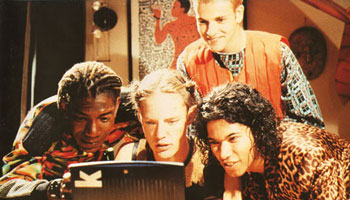 Government sources say the spy-virus is part of an anti-Iranian cyberwarfare attempt.

When the sneaky spy virus nicknamed "Flame" was first discovered by security experts at Kaspersky Labs, nobody seemed entirely sure which nation state was responsible for creating and distributing the malware. Suspicion fell immediately on the United States and Israel after researchers discovered a raft of similarities between Flame and Stuxnet, a different spy-virus known to be of American origin. Now, in a new twist, the finger of blame has been squarely pointed at the U.S. and Israel by anonymous "Western officials with knowledge of the effort."

Speaking to the Washington Post, these ghostly "officials" claim that Flame was designed and deployed as part of an attempt to slow down Iran's nuclear development program (as reported previously, Iranian security officials say they found a way to detect and neutralize Flame back in May). According to the officials, its primary function was to map and monitor Iranian computer systems in preparation for a "cyberwarfare campaign."

"This is about preparing the battlefield for another type of covert action," said a "former high-ranking U.S. intelligence official" who apparently spoke to the Washington Post. "Cyber-collection against the Iranian program is way further down the road than this," they added.

According to another of the anonymous officials, Flame is "proportionate to the problem that's trying to be resolved." Flame, which possessed the power to masquerade as a Windows Update packet and record Skype calls, is being slowly weakened as researchers dig around and learn its methods. However, according to the same apparent official, a drop in the effectiveness of Flame "doesn't mean that other tools aren't in play or performing effectively."

When asked about the allegations, neither the U.S. nor the Israeli administration responded.

The last time he spoke about the virus, Alexander Gostev, chief security expert at Kaspersky Lab, said that "it will take us 10 years to fully understand [Flame]." With that in mind, it's hard not to wonder what other secrets are waiting to be dragged out from within the malware's complex innards. It wouldn't be a surprise to anyone, really, if the claims laid out by the Washington Post's sources turn out to be true; the history of animosity between Iran, the U.S. and Israel is well-documented, with quiet acts of warfare having cropped up amidst the nations' violent rhetoric over the years. While the rest of this "cyberwarfare campaign" remains hidden from view, expect to hear more about this topic as the world wakes up to the reality of electronic warfare.

Gallery of the Day: 8 Deadly Computer Viruses That Shook The World DrStrangelove 0 Comments