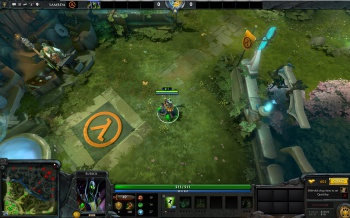 Valve has revealed the "first step" in what's to be a series of new plans for supporting Dota 2 at tournament level. Soon, players will have access to numerous new features such in-game tournament streaming, team customization options, and making events "more financially stable" by sharing proceeds from virtual ticket sales with event organizers.

Players will soon be able to pay a small fee to subscribe to professional tournaments they want to watch within the game client itself. Viewing these matches from within the game's own engine will remove the need for streaming large game videos while giving watchers extra control options and high-quality visuals currently unavailable in standard video feeds. Valve doesn't want to alienate those who want to tune in through a browser, however, so will be rolling out various yet-to-be-revealed ideas on how to provide these viewers a rich experience, too.

Further, there will be added support within the game for pre-built teams. Players will be now able to provide details about their group, while the game collects long-term performance statistics and adds their logo to special areas of the game.

All of this should massively improve the current tournament experience, still nominally in its beta phase. Most of the new features are set to be tested during the upcoming The Defense tournament, and will be rolled out to the community soon after.