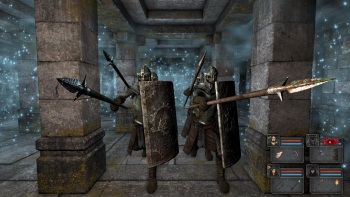 The Legend of Grimrock team is continuing to work on a level editor and considering ideas for its next project.

Legend of Grimrock, you may recall, is the wantonly old-school RPG that came out to critical acclaim back in April. Developed by the four-man indie team Almost Human, it was also, despite its grid-based gameplay and mercilessly vicious difficulty, a pretty big commercial success, which has allowed the developers to get down to the business of working on future projects without having to worry about starvation or sleeping in the streets.

Currently, they're up to two things. First and foremost is the Legend of Grimrock level editor, which is starting to come together but still in a very preliminary state. The original plan was to give the editor advanced functionality and "implement all kinds of interaction and logic with the Lua programming language," but they've now decided to use a simpler form of "visual scripting" instead.

"The dungeon designer can now connect actuators such as buttons, pressure plates and levers to doors, pits and other types of entities without writing a single line of Lua script," Almost Human's Petri Hakkinen wrote. "Of course this form of scripting has limitations because the designer is ultimately limited to the building blocks provided by the editor. That's why we still have Lua scripting support that can be used to implement more advanced puzzles."

The team is also working on a new "Grimrock-related project," although there hasn't yet been any firm decisions made as to what its final form will actually be. Hakkinen said that the studio has received "some very interesting and tempting offers about other game projects," but that the team ultimately decided that whatever it does next, it wants to continue making its own games.

"Whether it be an expansion, a full blown sequel or even something completely different, is still undecided," he continued. "Frankly, we were a bit exhausted with the whole concept of grid-based games after working so intensely for a year but as some time has passed we now think that we have more to give to this genre."

There's no word on when the level editor might be ready for a public reveal, but interested dungeon designers can follow the development process on the Grimrock forum.