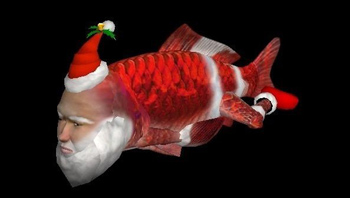 Seaman creator, Yoot Saito, hints at ... something with a Christmas-themed Seaman render.

Yoot Saito, the seemingly unhinged developer responsible for Seaman and Guild 01 posted the picture on the right on Twitter, complete with a cryptic message. As Andriasang translates:

"It's time to start thinking about the end of the year."

If I might engage in some wild speculation for a moment: that could be a potential release date for the 3DS port of Seaman that Saito has been hinting at since June 2010.

For those of you who didn't own the Dreamcast original; Seaman was a bizarre, virtual-pet game in which you're tasked with taking care of a human-faced, talking fish as it goes through the various stages of its life. An included microphone allowed the player to talk to the creature, which often responded with either related trivia or insults. By 2004, the game was the best-selling Dreamcast title in Japan. A remake and a sequel were released for the PS2 but they never made it to western shores.