For the first time, the same actress will provide motion and voice for Lara Croft. 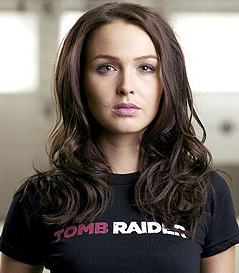 The voice - and for that matter also the rest her - of Lara Croft in Tomb Raider shall be Berkshire-born actress Camilla Luddington, game developer Crystal Dynamics has revealed. Luddington, whose roles include True Blood (Claudette) and Royals made-for-TV movie William & Kate, has been living and working in the US for six years, and this is her first video game role. It's also the first time that voice and motion capture for Lara have been provided by the same actress.

Crystal Dynamics studio head Darrell Gallagher said that getting Lara right was the most important part of the game, and the studio was very happy to be working with Luddington. "This Tomb Raider game is very different to any other," he said, "and we are demanding far more from the voice acting than ever before." Luddington is slated to meet the game world at the next San Diego Comic-Con, where she'll be talking about her role in more detail.

Tomb Raider is Lara's origin story, currently more infamous for its trailer - and the near-rape scene - than its plot. The survival narrative features Lara post-shipwreck, struggling to survive in a hostile island environment. The trailer featured mostly in-game footage, so Luddington's acting skills have already been on display; we just didn't have a name to put to a face.

No word from Luddington herself yet, as she's recovering from England's 4-2 defeat at the hands of Italy in Euro 2012; "Sorry but I wanna to turn the whole Italian team into a human centipede" was her reaction.