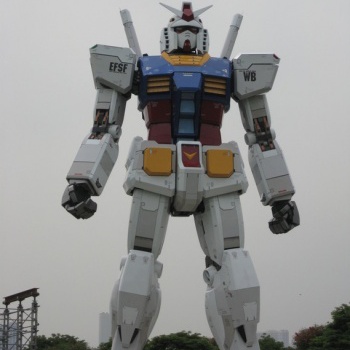 Japan loves Gundam; we all know this. Some of us have even written entire articles about it. In fact, Japan loves Gundam so much, a major political party has announced that it is considering an actual, real-life Gundam development program for its military.

Speaking on a political talk show broadcast on web site NicoNico Douga, members of the Japanese Liberal Democratic Party including key figures like party VP Tadamori Oshima and former general secretary Bunmei Ibuki said that the LDP was "seriously considering" a project to turn Yoshiyuki Tomino's giant fighting robots into a reality. They did not say that there were plans to find the perfectly emotionally-damaged teenager to fly the thing, but it was probably implied.

It bears noting that the Japanese LDP is not some fringe political party, either. The center-right LDP controlled the Japanese parliament almost continuously until its defeat in the 2009 elections. At that point, it began to splinter, but still remains a potent political force. Some might see this as a cynical ploy to appeal to right-wing otaku to bolster the LDP base instead of any real plan to field giant fighting robots, and in all fairness that some probably has a point.

Reactions online in Japan have been mixed. "Why not start by making some robots which can clean up after a nuclear accident, morons," wrote one commentator in reference to the Fukushima nuclear disaster. Another criticized the impracticality of fielding billion-dollar machines that could be taken down with some tripwire, Battle of Hoth-style. "Gundams would be useless in a real war. If their intent is anything more than to curry favour with otaku they should start looking at what would be." Others were more optimistic. "People ridiculing this are the same people who would have been ridiculing the car a century ago!" exclaimed one. And yet another simply had qualms with the LDP's choice of giant robot. "Why Gundam all of a sudden now? You start with Zaku, Zaku!"

The Gundam franchise began in 1979 with Yoshiyuki Tomino's groundbreaking anime Mobile Suit Gundam, a sci-fi war story that followed a young engineer caught in the middle of a struggle between Earth and its space colonies. It paved the way for the militaristic "real robot" genre (as opposed to magical "super robots") including 1982's Macross (better known as Robotech in the west), and has since become one of the most popular anime franchises of all time. Even if it can get a bit formulaic. And despite what Western fans will tell you, Gundam Wing totally isn't the best one.

I'd just like to say that I totally called this back when Japan was making its life-size Gundam statue. Right, a "statue." Sure, Japan. Sure.