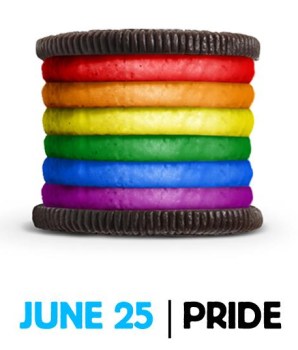 Not everyone is happy with Oreo's support for gay rights on Facebook.

Oreo did its thing for Pride Week yesterday, posting a Facebook status update with an image of a rainbow-colored Oreo cookie imposed over messages stating simply, "Proudly support love!" and "June 25/Pride." Nice, neat and to the point, and entirely unsurprisingly it attracted no small amount of publicity - some of it, sadly, rather less than complimentary.

Some of the negative comments claim to be frustrated by the politicization of the cookies, but most are a bit more straight-up anti-gay, like that of Janis Petron, who wrote, "You gay people make me sick, God made us to be man and women not gay or lesbian p.s. NO MORE OREOS." Or Cody Patterson, who said, "I can't support a business that supports gays." Aaron Foster described Oreo parent company Kraft as "Yet another liberal company destroying our religious values and teaching immorality," while Trevor Day pasted himself in the face with the Frying Pan of Unintentional Irony by stating, "Gays can all go kill them selves they are sinners and will burn in hell" while rocking a Neil Patrick Harris avatar. Mads Fjord pointed out the inevitable counter-campaign boycott, telling his Facebook followers, "Hate [homosexuals] so much. So many whose skulls I want to smash in with a hammer. I thank those who support this boycott and GOD BLESS AMERICA."

And yes, there is apparently some form of boycott going on, although the actual level of organization looks iffy at best - hardly a surprise to anyone who's seen the One Million Moms in action. Kraft, for its part, is unfazed, issuing a statement reiterating its support for gay rights.

"In recognition of Pride Month, Oreo created an ad depicting the Rainbow flag with different colors of Oreo crème. We are excited to illustrate what is making history today in a fun and playful way," the company said in a statement. "As a company, Kraft Foods has a proud history of celebrating diversity and inclusiveness. We feel the Oreo ad is a fun reflection of our values. "

The cynic in me insists that there's no small amount of savvy marketing at work in this campaign. After all, as evidenced by Ellen Degeneres, not to mention more than 175,000 (and growing) "likes" on Facebook, nothing gooses public support like a sliver of vicious backlash from homophobe morons on the internet. But at the same time, even if it is getting something out of it, how can anyone be critical of Oreo for standing up for a good cause? Unless they're a homophobe moron on the internet, that is.

But the worst thing about it all? Kraft isn't actually going to sell this six-layer rainbow monstrosity; it was made exclusively in honor of Pride Week.