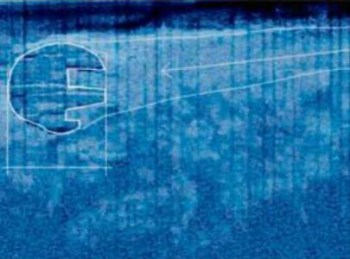 The mysterious, UFO-like object at the bottom of the Baltic Sea appears to be emitting some kind of localized EMP.

Back in the summer of 2011, explorers discovered a large, disc-like object lying 285 feet below the surface of the Baltic Sea. It was estimated to be about 20 meters in diameter, with a 200 meter flattened "trail" behind it, as though it had crashed and ground to a halt, and looked like nothing so much as the Millennium Falcon come to grief. Nobody knows what it is, but further investigation has revealed some rather baffling weirdness.

The object appears to be giving off some kind of interference that cripples nearby electronic devices. "Anything electric out there - and the satellite phone as well - stopped working when we were above the object," said Diver Stefan Hoberborn of the Ocean X team that initially discovered the disc and is now conducting further exploration. "And then we got away about 200 meters and it turned on again, and when we got back over the object it didn't work."

The team described the object as similar to "a huge mushroom, rising 3-4 meters from the seabed, with rounded sides and rugged edges." It has an egg-shaped hole at the top that leads inside, as well as "strange stone circle formations" that resemble "small fireplaces."

"We have experienced things that I really couldn't imagine and I have been the team's biggest skeptic regarding these different kind of theories," said Ocean X founder Peter Lindberg. "I was kind of prepared just to find a stone or cliff or outcrop or pile of mud but it was nothing like that, so for me it has been a missing experience I must say."

"I can't explain what we saw, and I went down there to answer questions, but I came up with even more questions," added Hogeborn.

The process of discovering what this thing actually is has been a slow one, due to both weather issues and, more importantly, a lack of funding. Another dive is scheduled "in the coming weeks," however, which may shed more light on its true nature.