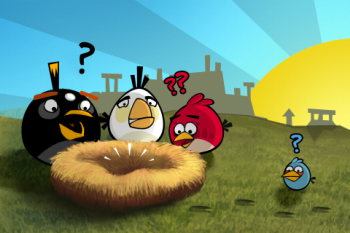 Word-of-mouth marketing is more effective than any advertising.

Core gamers attach an inordinate amount of importance to how a game reviews, lashing out at reviewers who liked a game they hated, or bashing reviewers who gave what was obviously a perfect-10 game a dismal 9.3. In all fairness, core game makers do the same, albeit in a different way. But according to Angry Birds maker Rovio, a group that doesn't particularly care two whits about review scores is the casual crowd.

At Gamelab in Barcelona, Spain, Rovio's VP of Marketing and Advertising Teemu Huuhtanen said that while positive reviews and marketing could help to give a freshly-launched game some sorely-needed traction, they wouldn't make it popular. "We try to monitor social media, Facebook, Twitter, blogs and even reviews," he said. "I think they are all important, especially in the beginning. But I don't think many casual gamers actually read any blogs or reviews - they hear about games from their friends, mostly."

Word-of-mouth marketing was the most effective way to spread knowledge about a new casual game, said Huuhtanen, though he admitted that it "definitely helps" to get good reviews in order to "gain momentum in the beginning."

It's also much easier for word-of-mouth to influence a purchase when each game can be downloaded for $1 directly on the phone you have with you at all times. If you tell me about this cool new game I can get for $1 on my Droid 3, it's easy to make an impulse purchase. But if I'm going to be dropping $60 on your word, it only makes sense to read reviews before I go in.