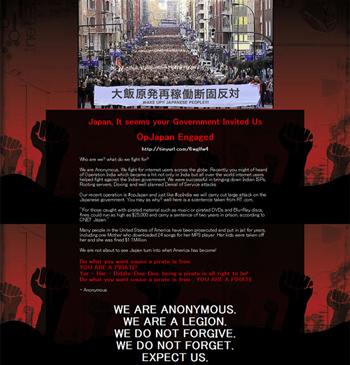 One of Anonymous' first targets in its war on Japanese copyright law is ... a water management office.

As part of a campaign against Japan's recently announced "Personal Illegal Downloads Punishment Act" - which, among other things, outlaws the circumvention of copy protection on DVDs and Blu Ray discs - a group claiming to be Anonymous has hacked into and defaced a number of websites loosely connected to the law. One of the websites - which was changed to feature a declaration of intent from the hackers as well as the group's traditional "we are legion" slogan - actually belonged to the Kasumigaura river management office, a government body in the Kanto reigion that deals primarily with flood control and water management.

"We are not about to see Japan turn into what America has become," read the site, followed by a few bars of the pirate song from kid's TV show, LazyTown.

It's believed the hackers mistook the site for that of the Kasumigaseki, which is actually a region in central Tokyo that contains a ton of government offices. "Kasumigaseki" is also used as a euphemism for those same offices.

As is usual with these kinds of attacks, the site was restored fairly quickly, but the mistake has caused much mirth amongst Japanese image board users, most of which are asking what it is exactly that Anonymous has against the nation's rivers and lakes.