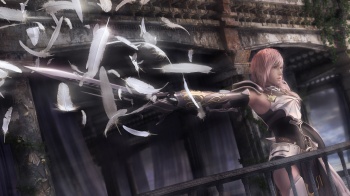 The next Final Fantasy could be outsourced to another studio.

Final Fantasy XIII had a fraught development process and director Motomu Toriyama - speaking at GDC Taipei - revealed what Square Enix will do to solve the problem. Future entrants to the Final Fantasy franchise may see much of their design outsourced to other companies, as Square Enix switches to Western-style game development.

"With a large-scale development team, we didn't use our time well," Toriyama admitted. Communication between departments and team members became one long game of Broken Telephone, since there were changes happening all the time but people weren't necessarily abreast with every single nuance of the changes. The end result was a lot of wasted effort, with workers laboring on plot points and art that wasn't needed thanks to narrative alterations.

"We are also thinking that we will not do large-scale internal development any longer," Toriyama told the GDC Taipei crowd. It's a targets issue; the larger a project the more unwieldy it is, and therefore more likely to miss its milestones. "We have a lot of great creators in Square Enix," Toriyama said, "but for larger-scale development we will be doing more distributed and outsourced development to reach our targets on time."

It didn't help that Square Enix tried to keep the details of Final Fantasy XIII a secret, since this meant that - in order to keep a lid on it - they couldn't test until much later in the development cycle than was wise. In the future, Toriyama says, Square Enix intends to apply Western development techniques, and use sensible project goals.

Square Enix hopes that their new strategy will reduce the costs of future entrants to the franchise, as well as making testing and development that much easier.