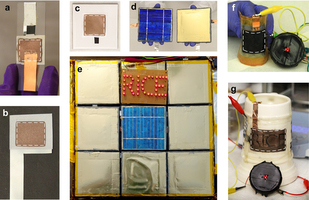 Spray cans have never before looked this useful.

Though we may sometimes overlook them, batteries of all stripes play a crucial role in most of our whizz-bang tech gadgetry. They're sometimes cylindrical, sometimes cuboid, sometimes so small we can barely see them; and now, thanks to the work a group of enterprising engineers, they're also available in spray-on form.

In an article published in Scientific Reports, a team from Rice University in Texas demonstrated their technique for using existing spray-paint equipment to spray rechargeable, 0.5 millimeter thick batteries onto a variety of surfaces including ceramic, glass, and steel plates.

They also sprayed a battery onto a beer mug, presumably in preparation for situations involving the phrases "my phone is dead" and "but guys you don't understand, I really need to text her right now." Well, that or they were demonstrating that the batteries function well on curved surfaces. You choose. Either way, the demonstration was a success.

The batteries are composed of five miniscule, distinct layers of compounds commonly found in lithium ion batteries, including one layer made of carbon nanotubes. The outer layer is made of something called poly-methylmethacrylate, which apparently protects the battery at the same time as allowing it to stick to curved surfaces (just like your pint glass, barfly).

Designed to satisfy the need for batteries capable of functioning in a variety of strange shapes and places, the spray-on battery will likely find success in large-scale manufacturing industries thanks to its compatibility with existing spray-stuff-onto-other-stuff technology. The authors cite the possibility of incorporating flat sheets of batteries into the bodies of electric cars, for instance, as a possible application.