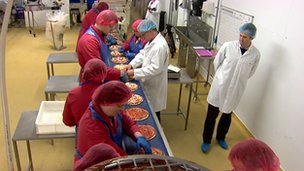 Scottish brainiacs have developed a nutritionally balanced pizza that can (and should) be eaten three times a day.

Pizza is a surprisingly complex food. It's delicious, relatively easy to make, and can be created with a near infinite variety of toppings. You may prefer other meals, but the odds are pretty low that anyone will build specialized restaurants around them that deliver right to your doorstep. The only problem is that eating copious amounts of pizza on a regular basis lends itself to an early death via heart disease or diabetes. But since nobody in their right mind was ever going to stop eating pizza to prevent little things like heart attacks, a Scottish team at the University of Glasgow have done a great service to humankind: they designed "nutritionally balanced" pizzas that can be consumed for every meal without putting yourself into a coma.

Using pizza as an example of "common foods eaten in huge numbers" that could be consumed at any time of day, Lean and Maclean started looking at ways to raise nutrient and vitamin content while lowering calories and carbohydrates to reasonable levels. The final product, using nutrient-rich seaweed in the dough, can actually meet most of the body's needs when eaten three times a day. "Each pizza gives a complete meal, with all the nutrients in it, for 30% of your day," Maclean explained.

But is it any good? According to 100 taste testers, the nutritional pizza is ranked as good or better than other frozen pizzas currently available on the market. United Kingdom Supermarkets are already in talks to bring the pizzas to their stores, but Lean and Maclean are moving on to develop recipes for nutritionally balanced fish and chips. Seriously.

While we'll have to wait and see whether nutritionally balanced meals will make their way to North America, please feel free to share which favorite artery-clogging meal you'd like to see a healthy version of in the comments.