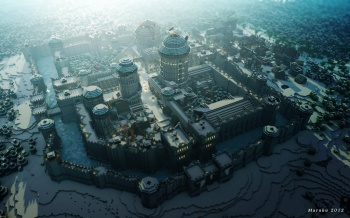 By the Others, Minecraft has never looked quite like this.

Take a look at the picture to the right. At first glance, it looks like a high quality screen capture from the popular show Game of Thrones. But after a few moments, you may notice that something's not quite right with it, although it's hard to put a finger on exactly what it is. Maybe it's a third-party 3D model someone designed? So you get right up to your screen, zoom in on the image, and squint real hard, and finally you might notice that everything about the image down to the snow on the ground is constructed from rows and rows of stacked blocks. Finally the shoe drops: You're looking at some of the most spectacular Minecraft screenshots that can ever be seen.

Okay, these images were put through third-party renderers and shaders, but that doesn't change that fact that you're still looking at Minecraft screenshots that remind us once again what you can do with a copy of the game and a lot of spare time. The screenshots were recently released to promote the utterly massive WesterosCraft project, whose goal is to construct the entire continent of Game of Throne's Westeros from the towering Wall all the way down to the individual buildings of King's Landing.

To give you an idea of the scale of this project, take a look at comments on PC Gamer's website written by WesteroCraft veteran Tothas. According to Tothas, traveling from the southern city of Sunspear all the way to The Wall in the north takes "an hour forty by rail" and the city of King's Landing took seven people three months to build. (King's Landing is also slated to be rebuilt because it's "too small".)

To see Westerocraft, you'll need a copy of Minecraft for PC and a specialized texture pack that will allow you to view everything correctly. Alternatively, while it won't give you a full sense of scale, you can take a look at a real-time Livemap while volunteers build and players wander around with slack-jawed awe.

Update: We've just received word that the Westerocraft team is releasing public builds of their material for players to use in single-player or on their own servers. A Reddit page has gone live allowing visitors to vote on the particular build that will be released first.

Thanks to Tothas for the info!