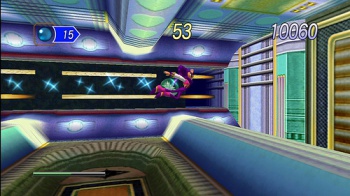 The Sega Saturn cult classic will soar onto XBLA, PSN, and Steam.

Sega's last two major consoles were a veritable cache of cult hits. From Panzer Dragoon Saga to Jet Grind Radio, the ill-fated Saturn and Dreamcast may fade away, but their games will live on as long as fans keep their memories alive. Sega will help fans do just that come this fall. NiGHTS into Dreams, one of the Sega Saturn's most fondly remembered titles, is getting the full HD treatment, and will rear its coxcombed head for download on Xbox Live, the PlayStation network, and Steam.

The specifics of the HD remake sound fairly by-the-numbers: In addition to improved graphics and a widescreen aspect ratio, the game will receive achievements, leaderboard options, and a "Saturn mode," which will allow players to experience NiGHTS as it originally appeared. "We've gotten a lot of requests about this game over the years, and are very happy to be able to give both former Saturn owners and new players a chance to play it in its most beautiful form to date," says Chris Olson, digital vice president at Sega.

While Dreamcast games have done fairly well with remakes and re-releases on the current crop of consoles, Saturn titles have been a little harder to come by. Assuming that NiGHTS sells well, which beloved property should Sega target for a remake next?