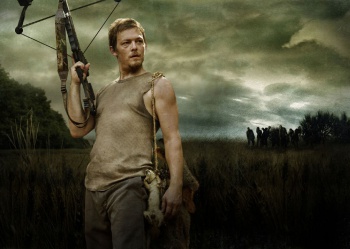 Find out how the Dixon brothers made it to Atlanta in Activision's upcoming FPS.

There's no shortage of zombie-related video games on the market, and Activision will be adding one more in 2013. The publisher announced that it's working on a first-person shooter based on The Walking Dead TV show. Developed by Terminal Reality, the game will focus on brothers Daryl and Merle Dixon and take place before the events of the television show.

The teaser trailer on the game's website doesn't reveal much, but one could assume it will shed some light on how the brothers make their way to Atlanta, where the show takes place. Activision's action FPS will allow players to use sight, smell, and sound to detect walkers and let them decide whether to use stealth to evade the undead or take them head-on.

This is not to be confused with Telltale's episodic Walking Dead series, which is inspired by Robert Kirkman's comic book. The television show is significantly different from the book on which it's based, so the two games probably won't share many similarities besides being set in Georgia during a zombie apocalypse. Terminal Reality's The Walking Dead will be rising on the Xbox 360, PS3, and PC next year, so expect to hear more about it in the coming months.

Source: The Walking Dead via IGN