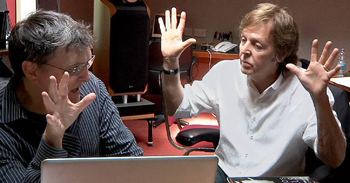 McCartney, or "Macca," as he's known to the UK press, announced that he was working on music for an unnamed game back in January. Today, he uploaded the image to the right to his Twitter and Facebook accounts, then tweeted the following:

"I'm really excited to be working on writing music with Bungie, the studio that made Halo."

That's a fairly vague statement, and it isn't clear if it's connected with the project McCartney mentioned back in the beginning of the year.

According to a contract that came to light during the publisher's drawn-out legal slugfest against former Infinity Ward developers, Activision has signed on Bungie to produce an unnamed science-fiction shooter franchise. The document also revealed that the developer is working on a new Marathon title, the first new installment in the series since 1996's Marathon Infinity.

Though known mostly for his pop-writing chops (and, as of late, his well-documented divorce) McCartney's solo career includes numerous classical and electronica albums. It's really not too hard to imagine him scoring a videogame.