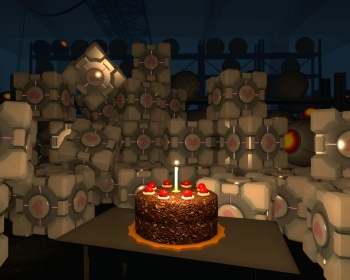 The Escapist is celebrating its seventh birthday with an epic, 64-game showdown.

On July 10th, The Escapist will join an 18th century war, a famous Itch, and Brad Pitt's tenure in Tibet as something famous for being associated with seven years. That's right, folks, it's our seventh birthday, and that means it's your birthday, too! So, to celebrate our seventh year of talking games on the internet, we're hosting the Year Seven Showdown, a week-long bracket tournament culminating in one game being crowned the greatest in Escapist history.

We've chosen 64 of the most important games released since 2005, and placed them head-to-head into a voting bracket similar to our annual March Mayhem competition. The Escapist community will then have its chance to vote on which games deserve to move on to the next round through a series of daily picks beginning today! Once only two games remain, a special 48-hour 1v1 showdown will begin July 14th, ending with a single victor July 16th.

Everyone who participates in the voting will be entered into a raffle for one of three prize-packs filled with Escapist swag. Each vote you cast will grant another entry toward winning a prize (including the new super shiny Limbo special edition!), so make sure to come back and support your favorite games each round.

You can head over to the tournament page to get started, but before you go we'd like to just say thanks to everyone who's been with us for seven years of fun, and to all who've hopped aboard along the way. We look forward to seeing which game you choose!