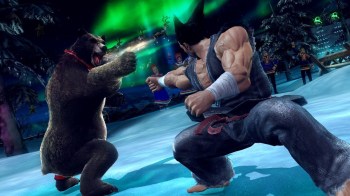 Not everyone is a fan of the Wii U's dual-screen design.

Back in early June, during the lead-up to E3, Nintendo raised the curtain on the Wii U GamePad and how it's integrated screen would work in conjunction with the larger, primary television display. Nintendo big cheese Satoru Iwata described it as "asymmetric diversity in gameplay," which is a fancy way of saying that what happens on the main screen and what happens on the GamePad display will be different; as an example, Iwata described players using the GamePad screen to pitch and catch a baseball, while a more expansive field-level view is displayed on the television.

It sounds potentially groovy, but not every developer is in a rush to embrace the system. Tekken Producer Katsuhiro Harada went so far as to call it a potential distraction, which is why the upcoming Tekken Tag Tournament 2 probably won't dig too deeply into the two-screen style.

"Looking at the small screen and the big screen at the same time is pretty distracting for a fighting game. So we're thinking of making it useful as a way of having shortcuts," Harada told Eurogamer. "Or, by making progressing through the game more convenient. Or by playing alone on the GamePad screen."

It's easy to overindulge in new technology and systems just because it's there, but sometimes the smart move is to stick with what works rather than trying to impress the ladyfolk with fancy footwork. It's a tricky balance, further complicated in this case by the fact that Tekken Tag Tournament 2 will launch first for the Xbox 360 and PlayStation 3 using standard controllers; if the Wii U control scheme is sub-par, fans can simply go elsewhere for their fix.

Tekken Tag Tournament 2 comes out for the Xbox 360 and PlayStation 3 on September 14, while the Wii U version is currently slated to hit later in the year.