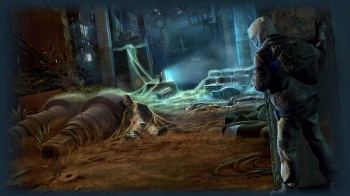 According to Vostok Games, we've got about eight years until the end of days.

The team at Vostok Games is nothing if not persistent. After the closing of Ukrainian studio GSC Game World killed development on S.T.A.L.K.E.R. 2, the developers decided to stick together and start a new project. The reborn Vostok Games is working on a free-to-play MMOFPS called Survarium, set in a post-apocalyptic year 2020. A new developer diary has shed some light on the specifics of the upcoming title.

Unlike the team's previous games, which revolved around a post-nuclear disaster scenario, Survarium throws humanity against a much more widespread problem: a "mass-scale ecological catastrophe." Mankind has abused nature for too long and now Gaia's vengeance is upon us, taking the form of unstoppable plant growth and a deadly strain of pollen allergies. Driven to the brink of extinction, the survivors are left to roam the hostile Earth in a desperate fight to survive.

Gameplay will be built on five character stats that level up with experience - firearms, physical, medical, and technical training, as well as knowledge of anomalies. The experience to increase these skills, along with the money to put them to good use, comes from a variety of mission types. Team Combat pits two squads against each other in a fight to secure a protective device before a supernatural storm kills everyone on both sides. Cooperative Playthrough missions have you team up with friends in a series of increasingly challenging objectives.

Perhaps most interesting is Free Play mode, which drops 20 to 30 players into a huge map with randomly scattered resources. It's every man for himself, and each player only has one life to reach one of the level exits. It sounds strikingly similar to DayZ, and according to the developers, should be "a real charm for lovers of atmospheric adventures."

Survarium has a planned release frame of late 2013. In the meantime, keep an eye out for more developer diaries, and keep stalking the game's website for more info.