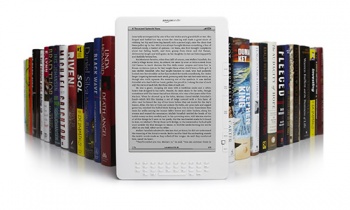 Terry Pratchett, the Discworld scribe, and Stephen Baxter, the science fiction author and creator of the Time's Tapestry series, have been working together on the first in what will be a trilogy: The Long Earth, an alternate-reality novel. The book has hit the shelves, which has come as a relief to both; but they haven't much time for rest, as they're busy working on the sequels.

The Long Earth features Joshua and Lobsang, a man and an AI, who discover the secret of traveling to alternate realities. It started as an idea of Pratchett's, long before he became famous for his Discworld series, but it languished in a drawer for decades. "Ideas are like tinsel," Pratchett claims, "anyone can have an idea, it's what you do with it that's the important thing." When he revisited the notion he realized there was good stuff in it, but he also knew that it was too much for one man to tackle. So he called on Baxter, an author he'd known for twenty years, because he needed someone who could say the word 'quantum' and knew what it meant.

The collaboration process was involved but relatively painless, thanks to mutual respect. Baxter describes the partnership as having four stages. In the first stage, person A suggests an idea and person B says it will never work. In the second, person B says it's none of his business whether A wants to go ahead and make a fool of himself with that silly idea. In the third, B says he quite likes the idea after all, and in the fourth B claims that the idea was his in the first place. "To which," Baxter says, "person A can only say, 'Yes, Terry.'"

The Long Earth is out now, in hardcover and Kindle editions. The full video of the interview can be had here.