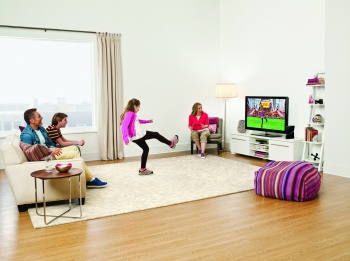 Calorie-counters can track their progress with a free Xbox Kinect app.

Exercise games, on the whole, may not be that good for you, but there's no denying that getting up and moving around burns many more calories than leaning back, slack-jawed, with a controller glued to your hands. For Kinect owners who get a kick out of games like Dance Central 2, today marks the release of the PlayFit Xbox 360 app. In addition to tracking the amount of calories burned during a given Kinect play session, this free tracker will allow digital exercisers to earn achievements and compete in Leaderboards.

PlayFit supports a number of Kinect titles, ranging from the predictable (Your Shape Fitness Evolved 2012) to the head-scratching (Kinect Star Wars). In addition to making up for that enormous cookie you had as a midnight snack last night, PlayFit will reward players with Achievements for meeting certain calorie-burning goals, let them compete with others via Leaderboards, and keep records of their own fitness statistics over time. The app also promises rewards for Avatars, presumably making them look just as fit and energetic as their conscientious controllers.

Even if motion-controlled games don't seem to do as much good as hitting up a gym or braving the great outdoors, there are definitely Kinect games that can burn a few hundred calories per session, and small gains like that can easily add up over the course of a few weeks - or months. If you have Kinect, PlayFit seems like it could be worth a shot; you have nothing to lose but a few pounds.

Jimquisition: The Xbox One: A Lying Failure Machine Jimothy Sterling 197 Comments
Comments on