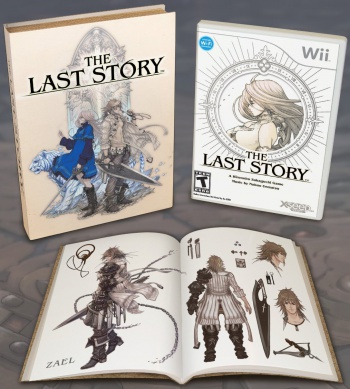 Pre-order the long-awaited RPG from select retailers for an extra bonus.

As residents of one of the largest gaming markets - with only a handful of languages spoken over a huge area, to boot - North American gamers are understandably used to getting special treatment. Fans of foreign titles, like JRPGs, often get the English localization either months before or nearly simultaneously with other major markets, like Europe and poor Australia. This isn't the case for The Last Story though; the critically-acclaimed Wii game by Final Fantasy's ex-executive producer is officially hitting North American shores on August 14, 2012, almost six months after the Europe and Australian release back in February.

It's not all bad news though - local publisher XSEED Games is throwing in a limited edition of the $50 game for all early purchasers, which comes with a softcover art book and the all-important special-edition packaging. The edition is limited to the first - and possibly only - print of the game, although the number of copies XSEED Games plans to print is unknown. If you decide to pre-order to guarantee yourself a copy, you might consider picking it up from Amazon.com, EB Games Canada, or GameStop to get a bonus CD, which includes some of Nobou Uematsu's compositions from the game.

The game's presence in America may be attributable to Operation Rainfall, a vocal fan project which was originally formed to convince Nintendo of America to localize The Last Story along with two other RPGs. However, when Nintendo President of America CEO Reggie Fils-Aime announced that The Last Story was coming to the Americas, he made no mention of the group. On the other hand, Xenoblade Chronicles - another of the group's goal games - also made it to America this April. Whatever the case, supporters of the Operation and fans of JRPGs will be able to support the localization with their wallets next month.