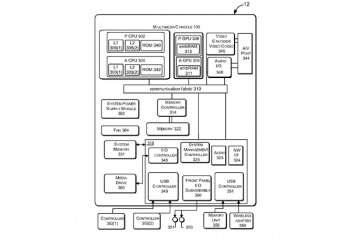 Microsoft has filed patent applications for a "scalable hardware system".

Remember those Xbox 720 design documents from 2010 that leaked onto the internet? Whether you believe they're genuine or not, it's hard to deny they hint at things that Microsoft would love to implement in its next console. Microsoft's takedown notices may not have been the confirmation on the matter we were hoping for, but the discovery of a US patent application has just reignited the issue. Four months after the internal documents were created, Microsoft filed patents for a scalable hardware system with certain design concepts bearing a curious resemblance to ideas from the Xbox 720 documents.

The patent application, which you can read here, was published quietly last month and recently discovered by Beyond3D Forum Member "Sonic". Unlike design documents, an authentic US patent application is much harder to dismiss with a wave of your hand, especially when the inventor named on the application is Jeffrey Andrews, one of Microsoft's chief hardware architects.

The patent abstract explicitly states that the system will run "media applications such as game applications" and repeatedly states that platform and hardware resources will be capable of scaling up or down over time. Several possible system models are mentioned in the patent, all of which allow for multiple CPU and GPUs, which might even suggest a level of customization more in line with the common PC.

While the technology behind the system itself is very interesting, the main question is why Microsoft would allow a console to be customizable at all? The most likely answer lies in our prolonged console generation. If the next generation were to undergo a similar process, the ability to immediately increase hardware capability might be enough to keep the system relevant for the cycle's entire duration.

If Microsoft does use this technology in their next console, I'm curious whether these customization options will be available to end users. After all, Microsoft already provided an official SDK for the Kinect and the Ouya Kickstarter conclusively proved that customization is a big deal. If one of the industry's biggest platforms opened the door for user-controlled hacks and upgrades, it may gain a huge edge in the upcoming console generation.