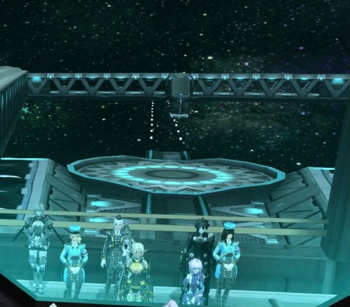 Sega JRPG has been made unplayable, but no user data appears to have been taken.

There are some people who just can't wait for sci-fi MMORPG Phantasy Star Online 2, and allegedly some of them - English speakers, according to Japanese fan sites - have hacked the game's servers, in order to make it unplayable. They've done it, according to the fan sites, because they're upset that the game is Japanese-only and they want to get global servers. If true ... well, this is slightly more effective than a petition, or wailing "I'm gunna quit the forums!", but not by all that much.

The hack is simple enough. Important NPCs have been reshuffled and put in locations where players can't get to them, making it impossible to continue quest lines. Sega claims that this is all that was done, and assures its Phantasy Star fans that no user data was taken. According to a chat transcript the users who claim responsibility for the hack did it to teach Sega a lesson. If so Sega has reason to be concerned, as the users claim they'll do it again.

In the transcript, one user says the intent is to "force Sega to patch," while another says "[Sega needs] to learn a lesson in busiess [sic]." That user also says "we should invade [several sections of the game world] one day during peak jp times, and let them know how pissed we are." One user claims that the hackers have been up to no good since closed beta, but this is the first time they've done something to make the game unplayable.

I'm sure Sega will respond to those poor unfortunate hackers' concerns just as soon as they can. No word as to whether this West-versus-East hacking will delay the 2013 roll-out of the Western version of Phantasy Star Online 2.