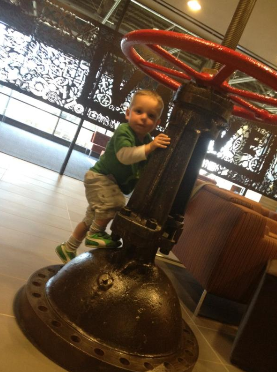 Clint Hocking, he of Far Cry 2 and Splinter Cell fame, may have found a new home. He left his post at LucasArts back in June, and earlier today posted a Twitter picture of his son climbing one of the Steam icons at Valve's Seattle studio. The caption to his post merely read "Arrival (and son)," but the near-universal internet suspicion is that this teaser Tweet indicates he's gone over to the Valve side.

When he left his LucasArts position on June 29th, Hocking said in his blog that "I already have something lined up and I am currently in the process of dealing with the living hell of relocation." "I will let the world know where I'm going once I get there," he went on to add. The picture has been taken as confirmation that his "something lined up" was in Seattle. In a follow-up Tweet, while not specifically admitting that he was now a Valve man, Hocking did say that "I guess my assertions about the need for things to change inevitably became more than just assertions."

Hocking's time at LucasArts doesn't seem to have been particularly productive. Though he claimed to be working on several different things, no finished product resulted. After two years down the LucasArts salt mines Hocking may well hope that, whoever his next employer ends up being, he gets something interesting to do. He left Ubisoft back in 2010 because, in his words, he was "too comfortable." No concrete word as to why he left LucasArts, but odds are it wasn't because he was too comfortable this time.