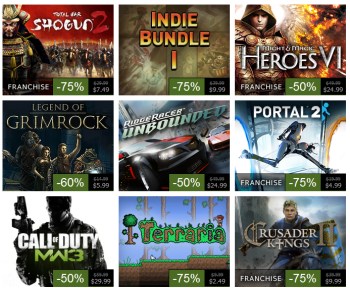 In case you weren't paying attention the first time I said it, the Steam Summer Sale is live!

The truth is that there's not much more to say than that. Although it's a bit behind schedule, the Steam Summer Sale is now alive and kicking, so you should probably head over there and see what's up. But since I have space to fill, here's a tiny preview of what's in store:

There are publisher packages on sale as well, and new daily deals happening every day from now through July 22. And yes, the above list does tend to reflect my own personal interests and tastes in gaming, but so what? It's the Steam Summer Sale, which means that no matter what you're into, you're going to be able to find at least two deals that knock your socks off. Clean off!

Store.steampowered.com, people. Wallets at the ready. Let's do this thing.