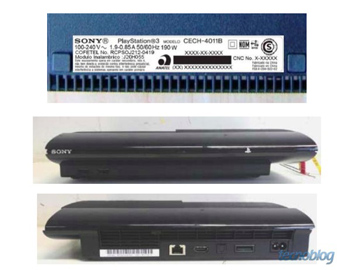 If pictures unearthed by Brazlian tech site are to be believed, the new PS3 model looks a lot like the PS2 slim.

The picture to the right was harvested from the website of Anatel, Brazil's Agency of Telecommunications. The document that came with the image makes reference to models CECH-4011A, CECH-4011B and CECH-4011C. For those of you who don't speak long-unwieldy-model-code-ese, the latest line of slim PS3s is the CECH-30XX series.

Assuming the images are legit, the new PS3 sports matte ribbing, and the panel on the left of the symbol looks very similar to the cheaper, top-loading CD drive used by the PS2 slim.

Earlier this month, NeoGaf users discovered an FCC database filing for an unannounced PS3 model. Most of the information in the filing is confidential by Sony's request, but the few diagrams the press managed to get hold of indicate a smaller, squatter version of the console that's closer to the original PS3 in shape. The image from Anatel does seem to match that description.

Of course, it could also be a hoax made up of pipe cleaners and corrugated plastic.