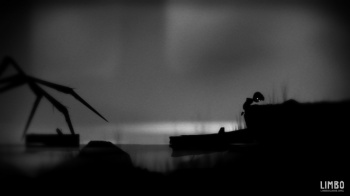 Playdead's unnerving, million-selling platformer, Limbo made a big splash when it was released on XBLA back in July 2010. Due to Microsoft's habit of pushing for timed exclusives, the game didn't make it to PSN until nearly a year later. An odd result, given that Playdead offered Limbo to Sony first.

According to Sony Computer Entertainment Executive Producer Pete Smith, talks with Playdead broke down because Sony wanted to retain the intellectual property rights to the game.

"There are obvious benefits to keeping it [the IP rights], but also to giving it up: you're way more likely to get the deal," he said to developers during a talk at the Develop Conference. "Remember: 100 per cent of nothing is nothing. A publisher is much more likely to commit to marketing and merchandising if they own the IP."

"Sometimes all we want is protection so [developers] don't make a game, finish it then go to one of our rivals," he said. "We look at IP on a case by case basis. With a bit of common sense, you can find common ground."

Unfortunately, Sony didn't find that common ground in this case. Limbo sold 300,000 copies in its first month on XBLA and had broke a million by the end of 2011. When it was finally released on PSN, it quickly became the service's best-selling downloadable title of 2011, but presumably could have performed even better if Sony had got it out first.