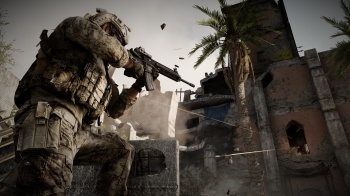 Battlefield and Medal of Honor have a lot in common, except fans.

"We are very careful that Battlefield and Medal of Honor stay differentiated," he said. "There is an inefficiency to having two different brands coming out alternating like that; there is some upside. You don't have the annualized, sequel fatigue. With Medal of Honor we tried to embrace that the game is real. The multiplayer is different than Battlefield. We're trying to use a sequencing strategy to keep it as fresh and different as possible."

According to EA's market research, the Medal of Honor crowd are looking for "more authentic" gameplay and storylines.

Despite its claims to the contrary, EA hasn't been shy about trying to cross pollinate the two fanbases. Medal of Honor's multiplayer was developed by Dice, the same studio responsible for the Battlefield series, and the upcoming Medal of Honor: Warfighter comes with a beta invite for Battlefield 4.

Source: Game Informer via Attack of the Fanboy