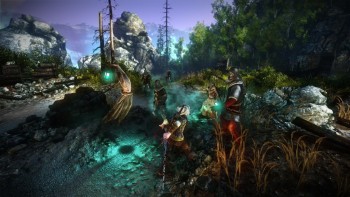 The Witcher developer, CD Projekt RED's, habit of dishing out free content updates for its games makes the small Polish developer stand out amongst its paid-DLC-pushing peers. The studio isn't releasing them out of the goodness of its heart, however. The content updates are part of an, apparently quite successful, business plan. The free DLC for the The Witcher helped drive sales of the Enhanced Edition of the game.

"When we put it out for free, we saw a boost in the sales with the Enhanced Edition because it just created good will, and it refreshes the product," joint-CEO, Marcin Iwinski, told Gamasutra.

"You can always do it from two angles, and sadly I see the industry trending toward over-exploiting the gamer," he continued, "and I think this will come back to the publishers that are doing that, and eventually, people will stop buying their stuff. That's just not the way things work."

Iwinski added that the publishers CD Projekt spoke to just couldn't get their heads around giving away stuff for free.

"When we had that publishing deal, we went to the publisher, and said, 'So we have this idea where we make all this stuff, all this new content, and you don't pay anything for it, we give it away for free. How about that?'" he said. "The publisher went all big-eyed and said, 'Whoa! Let's charge 10 dollars! 10 Euro!' But we believed that we would sell more units if we put it out for free."