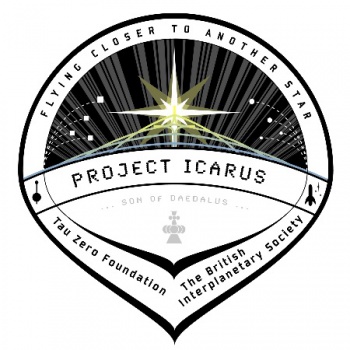 Icarus Interstellar wants to use lasers to create antimatter fuel out of the vacuum of space.

Although it's a beautiful concept, the reality of interstellar space travel is one that features an enormous amount of practical hurdles. One of the biggest problems presented by the "assuming we don't invent faster-than-light travel soon" school of far-flung dreams is the issue of fuel; namely, how do you supply a craft with sufficient fuel for a massive journey without weighing it down too much? Now, in a neat twist, a nonprofit interstellar research foundation has brought us closer to solving that problem: Icarus Interstellar has drawn up a working theory for an interstellar spacecraft, known as "The Vacuum to Antimatter-Rocket Interstellar Explorer System" (VARIES), that is powered by a laser that generates antimatter fuel out of the vacuum of space.

Designing a workable antimatter spacecraft has long been a goal of scientists with interstellar ambitions (NASA started work on a similar system back in 2006). What makes Icarus Interstellar's idea special is that while all previous antimatter engine theories have required that the spacecraft carry a small amount of on-board fuel to kickstart the antimatter creation, the VARIES theory allows for a drastic reduction in traditional fuel use.

Here's how it works: In order to generate get energy from antimatter, you must first get yourself some antimatter. The Icarus team proposes doing this by using an incredibly powerful laser to agitate the vacuum into creating positron-electron pairs (energy is created when the antimatter positron collides with the electron, releasing a nice big dose of radiation) in a specific "quantum field," basing the idea on Nobel Prize-winner Julian Schwinger's work on quantum electrodynamics.

Armed with vast solar panels, a VARIES craft would get to a nearby star using hard, modern space-fuels. Once there, it would unfurl its panels and use them to create energy to power its high-powered laser, which would in turn generate the positron-electron pairs needed for the journey home. If it works, the craft would store up enough of this energy to allow it to make it home with its sails re-furled. Additionally, storing antimatter is a fairly tricky business; more information on how the team plans to deal with that, and other physics-based conundrums associated with the project, can be found at Icarus Interstellar's peer-reviewed articles page.

Still with me? Glad to hear it. The advantages of an antimatter-powered spacecraft are myriad, with the first big plus being that it weighs a lot less than a craft that needs to carry its fuel (chemical, nuclear, or what have you) on board. Above all else, this makes it much cheaper to launch, in addition to freeing up onboard space otherwise occupied by fuel supplies. Provided its solar panels can be folded up and re-used, there also exists the possibility that a craft of this kind could hop from star to star, refueling itself every time it gets close enough to a new one.

At the moment, the VARIES craft-idea is still very much in development. Happily, the physics behind it seems solid enough to carry the project forward. The number of interstellar hurdles VARIES can jump remains to be seen; but for the moment, it's pleasing to see practical progress towards beating Voyager's record.

Science and Tech: WTF Science?! Can You Guess What These Strange Pics Are? Fanghawk 4 Comments
Comments on