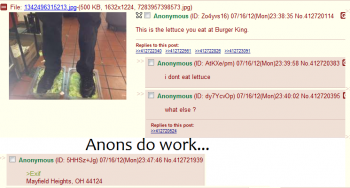 Turns out 4chan isn't the best place to brag about messing with people's food.

As a forum community that hinges on complete anonymity and an anything-goes environment, 4chan and its associated group 'Anonymous' tend to be wildcards. Their appearances in the news range from getting busted for child pornography to collaborating with the FBI to prevent a school shooting. Fortunately for society at large, 4chan users have once again used their powers for good; this time, they've tracked down a Burger King employee and had him fired for violating health and safety standards.

An anonymous user - presumably the culprit himself - posted a picture of a Burger King employee standing in two tubs of lettuce with the caption, "This is the lettuce you eat at Burger King." Unfortunately for the lettuce stomper, he forgot to take into account the file's Exif data, which betrayed the GPS location of the photo. Other 4chan users quickly ferreted out this data and pinpointed the exact location of the Ohio Burger King branch, then proceeded to alert local news outlets.

Cleveland Scene picked up the story and contacted the Burger King franchise in question, and the manager's reaction was immediate. She took one look at the photo in question and stated, "Oh, I know who that is. He's getting fired." She further stated that the manager on shift at the time would also be shown the door. According to a subsequent official statement from Burger King sent to Fox 8 Cleveland, the employee has indeed been swiftly terminated. Not bad, considering the original post went online just two days ago.