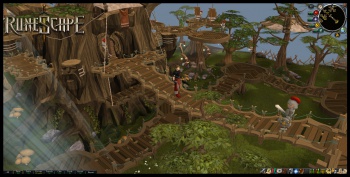 Jagex celebrates 200 million users with a new boss and a look back at RuneScape's past.

Quick, off the top of your head, what's the most popular MMO? There are a couple contenders - World of Warcraft has, of course, held the top spot for some time, and it's still the standard-bearer other games refer to. Then there's League of Legends, which recently outpaced World of Warcraft in terms of sheer playtime. Now there's another, dark horse candidate: RuneScape. The browser MMO is celebrating a milestone of 200 million lifetime registered users, which is more than any other game of its type.

Registered users aren't necessarily active users, but it's still an impressive feat for the ten-year-old game. Developer Jagex is celebrating with a special website that keeps a running tally of current users, shows a timeline of major events over the course of the game's life, and even includes an infographic listing a variety of statistics for the game. The infographic boasts, among other things, more than 443 billion total minutes of playtime, 150 dragons killed per day, and 27 player deaths per second.

Released in early 2001, RuneScape is one of the longest-running MMOs in the business. While smaller titles may boast a longer official uptime, like the 15-year-old social MMO Furcadia, RuneScape has by far the most players combined with the longest run. Most of these players have registered in the past few years - RuneScape had only half as many players in late 2009. Jagex has grown its playerbase partly by keeping up with the times, releasing literally hundreds of updates and earning the Guinness World Record's Award for "Most Prolifically Updated MMORPG." The interactive timeline on the celebration website gives an interesting picture of just how far the game has come from its inception.

Jagex is also celebrating the milestone in-game with a new special boss that has, you guessed it, 200 million hitpoints. That's going to take a lot of clicking.