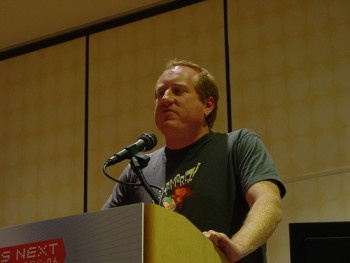 Seamus Blackley isn't worried about a lack of innovation in videogames.

When three videogame developers suffer mass layoffs in a period of two months, it's very easy to be skeptical of the state of the industry, unless you're Seamus Blackley. Blackley came from a background in High Energy Physics when he joined Microsoft to work on DirectX and the initial Xbox proposal. From there, he co-founded the Capital Entertainment Group to reform videogame financing models, and later represented developers with the Creative Artists Agency. Now his latest initiative, a videogame team comprised of former Atari developers, has only reinforced his belief that for all its ups and downs, the industry on the whole simply cannot fail.

"I remember the birth of 3D PC games and the rise of the NES and PC and PlayStation," Blackey said in an interview with alistdaily. "There was a point where a recruiter said to me 'Anyone without skills to work on PlayStation isn't going to have a job.' There have been lots of twists and turns, and what it teaches us is the industry itself is undefeatable."

It's not an entirely unfair point; for years we've been hearing about the death of PCs as a gaming platform only to see the format explode, while consoles have gone through their own ups and downs ever since their creation. To Blackley, what appears to be the death of the industry is actually a shift from one formerly innovative format to the next, which has continuously moved the industry from arcades, to computers, to consoles, and most recently, mobile games.

"The key takeaways are that great games continue to be great and that we work in the greatest industry out there," Blackley continued. "The business models that work are the ones that let people play the game they want. How to play Half Life 2? Get Steam. Want to play Halo? Get an Xbox. Want to play Angry Birds? Get an iPhone. We now see that great devices get great games. Rather than people being put down by this, it's extremely exciting."

With this spirit in mind, Blackey has founded Innovative Leisure to create games alongside original Atari designers like Rich Adam (Missile Command) and Ed Rotberg (Battlezone) for mobile phones and tablets. It's certainly a promising concept, considering the talent and background of those involved, and with luck they'll be able to prove that the industry is just as unbeatable as Blackley believes.