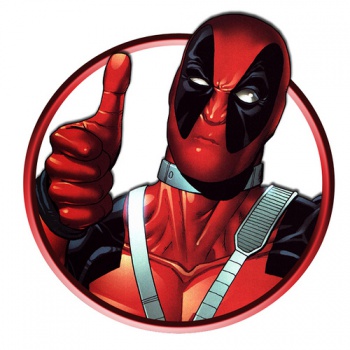 Marvel Comics and Deadpool fans were very excited to see the Deadpool game trailer at Comic-Con, thanks in no small part to an accurate portrayal of the character consistent with Daniel Way's comic books. Featuring Deadpool's signature fourth wall breaking conversations with his split personalities, over-the-top violence, and Deadpool behaving like, well, Deadpool, the trailer assured comic book fans that the game would remain true to the original character. But Marvel and developer High Moon aren't stopping with Comic-Con's announcement; the team is "letting" Deadpool run their entire marketing campaign, including the official website, Deadpool's Facebook and Twitter pages, and even a Deadpool-inspired press release.

"I, Deadpool, 'hired' Peter Della Penna and his physically embarrassing team at High Moon Studios for two reasons," Deadpool's press release reads. "First, because of their close proximity to Mexico so I can get fresh, authentic chimichangas delivered daily ... Second, if High Moon can make an amazing game about big transforming robots look cool, then they can surely make me look amazing in a third-person action video game, from all angles (seriously Peter...my bottom is my good side, so don't screw this up)."

Keeping the tone of the game and marketing closely tied to the comic is no accident. Penna reveals later in the press release that Daniel Way has written the story for the game, bringing his signature Deadpool humor to the title. "We weren't actually planning on making a Deadpool game," said Penna. "But,Deadpool came by the studio one day, said he was taking over, and that if I didn't hire Marvel writer Daniel Way pronto and make the most amazing Deadpool video game, he'd break both of our arms and beat us to death with them. I have kids, so we're making the game."

Deadpool hasn't always been adapted as well as comic book fans would have liked. In games, Deadpool tends to appear as a minor antagonist against other, more popular heroes. Much more out of character was an appearance in X-Men Origins: Wolverine with his mouth stitched shut, which kinda defeated the whole point of his "Merc With A Mouth" tagline. The announcement that Way is writing the story should lend itself well to proving that High Moon is finally making the game that Deadpool fans have always wanted to see.

Escapist Podcast: 212: What Should Other Superhero Movies Learn From Deadpool? The Escapist Staff 0 Comments

Now That We Have Deadpool, What Happens With Lobo? Aaron Williams 4 Comments
Comments on