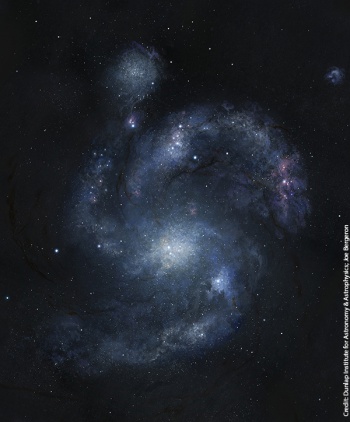 BX442 is so old that it shouldn't really be a spiral galaxy at all.

Over the past 22 years, the venerable Hubble space telescope has shown humanity a great many wonders from the distant past of our galaxy and universe. Now, continuing its mission to find the oldest and weirdest bodies in the universe, Hubble has pointed astronomers towards an odd spiral galaxy that looks to be around 10.7 billion years old. While spiral galaxies are by no means uncommon in the modern universe, this ancient spiral, named BX442, is the first of its kind to be seen so far back in spacetime.

Spotted by Hubble and refined by the Keck Observatory in Hawaii, the elegantly-named BX442 perplexed astronomers when Hubble first picked it up. Being as old as it is, the galaxy shouldn't have such a refined spiral shape; if we're right about the Big Bang, the universe should've been too much of a hot mess back then to allow anything so pretty and defined to form. So what's up with BX442?

A team of researchers, writing in Nature, think they may have found the answer. According to David Law of the University of Toronto's Dunlap Institute for Astronomy and Astrophysics, a lead author in the study, the explanation for BX442's weird shape lies in some quiet assistance from a small friend. In this case, that friend is a small dwarf galaxy floating around the outskirts of the spiral.

"You can get a little extra help if you've got a satellite galaxy orbiting around," said Law. "It gives that extra little gravitational kick to help accentuate the strength of the arm and make it into one of those eye-popping examples like the Whirlpool galaxy that you see all the pictures of."

"What we've learned when we look at galaxies at that epoch is that they're very dynamically hot," continued Law. "Even though we see some discs existing at that time, they're very thick and puffy, whereas the Milky Way has an... amount of random motion only about a tenth or so the amount of ordered rotation, giving rise to a very thin disc."

As the authors point out, BX442's spiral arms may have been a transient feature, a cosmological accident of sorts; further investigation into ancient galaxies should yield further clues. Armed with proof that spiral galaxies of this kind did indeed exist during the universe's relative infancy, Law and his colleagues are off to point Hubble at some more regions they suspect of harboring ancient galaxies. Is BX442 the only super-ancient spiral galaxy out there, or is its formation not as unique as it first appears?

The Escapist Presents: Why Fanfest: From the Fans Slycne 0 Comments
Comments on