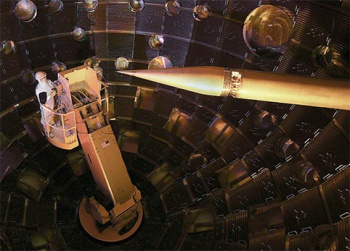 Good news for fusion power is bad news for Alderaan.

Whether attached to sharks or propelling interstellar spacecraft, lasers are proving exceptionally useful in our technological age. After years of development, a team at the Lawrence Livermore National Laboratory's National Ignition Facility (NIF) in California has now pushed lasers further than they've ever gone before by unleashing a pointed blast from their gigantic laser that delivered over 500 trillion (500 terawatts) of power, 100 times more than any other laser tested to date.

By firing 192 small lasers simultaneously, the NIF team was able to cram the 500 terawatts into one Death Star-esque beam. For reference, 500 terawatts is about 1000 times as much power as the entire United States is using at any given moment.

In good news for fans of fusion power studies, the extreme levels of energy in the beam also meant that it, for a split second, created conditions not dissimilar from those we find in the hearts of burning stars.

"The 500 terawatt shot is an extraordinary accomplishment by the NIF team, creating unprecedented conditions in the laboratory that hitherto only existed deep in stellar interiors," commented Richard Petrasso, a physicist at the Massachusetts Institute of Technology.

Edward Moses, director of the NIF, is predictably pleased with the result of the test. "NIF is becoming everything scientists planned when it was conceived over two decades ago," he said. "It is fully operational, and scientists are taking important steps toward achieving ignition and providing experimental access to user communities for national security, basic science and the quest for clean fusion energy."

The next step for the NIF and its laser will be to further test its possible applications in the field of fusion energy research. When fired, the laser was focussed on a pea-sized capsule; were that capsule loaded with the right kind of materials, a blast from the laser could kick off a fusion process by means of something called inertial confinement fusion (where the laser's power would make the capsule's surface explode outward, sending energy inward with enough force to compress the capsule's innards into a fusion reaction). If the NIF pulls that off, expect to hear about it in a big, big way. If not, well, the lab has the world's most powerful laser. Either way, let's be cool to them, yeah?