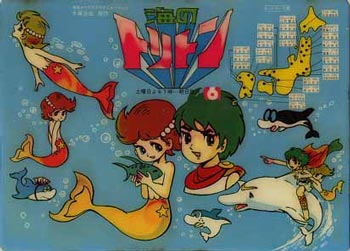 Triton is one of several lesser-known mangas by Osamu Tezuka coming to the West thanks to crowd funding.

While the work of legendary mangaka, Osamu Tezuka's, can be found in most bookstores worth their salt, only a fraction of the "godfather of anime's" work has made it to the West. In June, North American publisher, Digital Manga, started a Kickstarter campaign to publish some of Tezuka's less-known work in the US. The project was originally asking for US$20,500 to publish another manga by Tezuka, Unico. At the time of writing, the total amount pledged stands at $48,233, meaning Digital Manga will also be publishing two other mangas, Atomcat and Triton of The Sea.

Unico will be published in a single, full-color volume, Atomcat in a single paperback volume and Triton in two separate volumes costing $19.95 each.

Triton, the tale of a young boy living in modern Japan who discovers he's the last survivor of the destruction of Atlantis, originally ran in the Sankei Shimbun newspaper from 1969 to 1971. Unico is about a baby unicorn that makes people light-hearted and happy, and Atomcat was a spin-off from Tezuka's ever-popular Astroboy series.

This isn't the first time Digital Manga has used Kickstarter to fund western releases of Tezuka's work. In January, the publisher successfully funded a release of Barbara, and last year it used the service to fund a reprinting of Swallowing the Earth.