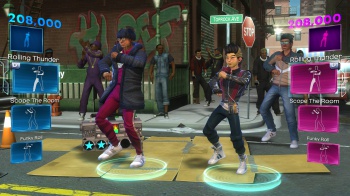 Let's cut to the chase: Dance Central 3, the latest entry in the hit Kinect series, is coming to Xbox 360s on October 16 in the Western Hemisphere (and October 19 in that other one). Harmonix has released a tracklist full of campy hits that you're going to roll your eyes at, but then dance to like a raving madman once it's released and you've had a few at a party. Oh, sure, the game has its share of Maroon 5 and LMFAO, but you're going to have to evade the Backstreet Boys and Vanilla Ice to get there. That, and Dance Central 3 will feature a story mode involving time travel. Who'd have guessed?

Dance Central 3 will ship with more than 40 tracks, including songs by Usher, 50 Cent, and Cali Swag District. However, unlike previous games in the series, which focused mostly on modern hits, a good chunk of this game's library will come from the past, both distant and recent. Want "The Hustle" by Van McCoy? You got it. "Turn The Beat Around" by Vicki Sue Robinson? Check. If you want to dance to "Y.M.C.A.," "Macarena," or, for some ungodly reason, "Ice Ice Baby," you're all set. Dance Central 3 also supports song imports from the first two games, which means you could, in all likelihood, dance the night away (sadly not included in the game ... yet).

To justify this nostalgia trip, Harmonix will be sending players back in time during the story mode in order to learn how the strange and distant peoples of the 1970s, 80s, and 90s danced before the invention of modern tools like auto-tune and holographic duets with dead people. The choice for a series to embrace whole new eras of dance music may seem like an odd one, but from a marketing standpoint, it makes perfect sense. Dance Central 3 is hardly abandoning its hip-hop and pop fanbases, but the first two games have covered most of those genres' big hits from the last few years. By winding the clock back, it could attract a whole new slew of older and casual fans.

Whomever ends up buying Dance Central 3, they can rest easy knowing that they'll have found a socially acceptable way to listen to "Everybody (Backstreet's Back)" for the first time in almost fifteen years.

Gallery of the Day: 8 Horrible Television Shows From The 80s and 90s DrStrangelove 3 Comments