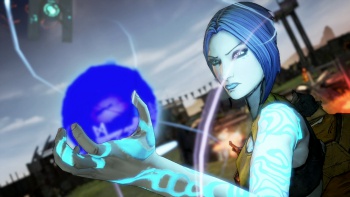 "We're in an industry where people do nothing but steal from each other," says Gearbox boss, Randy Pitchford.

Gearbox's Borderlands was a tremendous success. It was well received by critics, and it clocked up over 2 million sales, an impressive figure for a new IP. But, despite nearly three years on the market, it's still the only title filling its particular shooter/RPG niche, at least until Borderlands 2 arrives later this year. Gearbox CEO, Randy Pitchford, is wondering where all the imitators are at.

"I'm actually astonished that we're about to launch a sequel and no one's stole it from us," he told Gamasutra. "The formula's right there. No one's stolen it yet. That's weird. We're in an industry where people do nothing but steal from each other. That's kind of interesting, isn't it? Not that I want anyone to steal it, or I'm challenging people to steal it."

While many developers seem intent on fighting for the Call of Duty crown, Pitchford questions why developers don't just avoid the competition by trying new things.

"Why let our brains get beat in and put so much energy, when we're not even sure we can beat the best boxer? We can create new sports, or we can win some other sport," he said. "If you're the only ones that do something that people find as valuable? You don't have to worry about competition. Like, Borderlands has zero competition. It doesn't have to worry about that at all."

Of course, that kind of lightning-in-a-bottle idea presents a problem when it comes to marketing. Announce your product too early, and you run the risk of opportunistic imitators beating you to the market. Announce it too late, and you won't have an audience when it comes out.

"When talking about Borderlands 1, it was really confusing, because on one hand we gotta scream from the highest mountain to get attention because it's a new IP," Pitchford added. "On the other hand, it's like, "shit, we don't want to tell people our secret because then they're all gonna copy it because it's so good."

We'll get to see if Borderlands 2 winds up as successful as its predecessor when it's released on Xbox 360, PlayStation 3 and PC on September 18th.