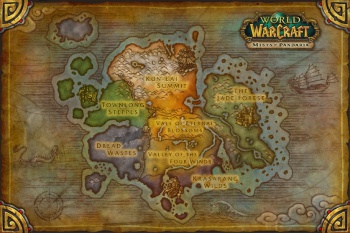 The newest expansion for World of Warcraft has a release date, and it's sooner than you think.

There's been a lot of talk about MMOs charging subscription fees, and how that model is dying. New MMOs continue to crop up and gather some momentum - the past year alone has seen The Old Republic, Tera, and The Secret World - but none of them get anywhere near the critical mass that World of Warcraft continues to enjoy. And Blizzard keeps updating the game world with enough fresh content to keep the masses happy, the latest of which will introduce a complete new class, a new race, and a whole new continent to explore. Today, Blizzard announced Mists of Pandaria will be available on September 25th, 2012

You have several ways to buy the expansion, and Blizzard is pushing the digital way of doing business. There's the standard digital copy available for $39.99, which you can pre-order now. Then there's the Digital Deluxe version for $59.99, which comes with a bunch cosmetic in-game goodies like a Imperial Quilen mount and Lucky Quilen Cub minipet, as well as portraits and banners you can use in Starcraft II and Diablo III. Of course, the attractive physical Collector's Edition is always an option too - the fancy box, art book, behind-the-scenes DVD, soundtrack and digital items will set you back $80.

Hmm, that reminds me. I should dig up that old in-the-plastic Burning Crusade Collector's Edition and see how much I can get for it on Ebay.

Even though I don't play as much WoW as I used to, the story behind Mists of Pandaria still quivers my long purple ears. The continent of Pandaria was hidden behind a shroud for eternity, but the warring Alliance and Horde warships have shipwrecked on its shores to find a wild landscape and the alien Pandaren beset by dark dangers.

You can play as a Pandaren - choosing to side with the Horde or Alliance - and train in the ways of martial arts. The monk is the first new full class introduced to WoW since it came out in 2004, the Death Knight from Wrath of the Lich King only playable from level 55. Add in the features of a Pokemon-like minipet battle mode, challenges to complete dungeons on the clock, and a revamped talent system, and Mists of Pandaria feels like an expansion packed with stuff to do.

After Blizzard introduced the expansion at last year's BlizzCon, we all knew it would be coming in 2012, but still the short window between announcement and release date leaves only a two months to mentally prepare to be a panda. Have you chosen your talents? Have you brushed your fur? Have you drunk enough Blackrock Lager?