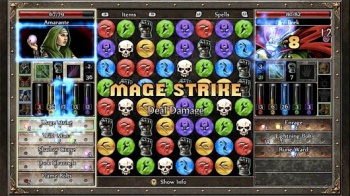 For a good many years, gamers viewed EA as either "the Evil Empire" or "that company that destroyed my favorite game studios". After EA figured out that buying all of the developers wasn't helping its public image, it eased off of the acquisitions and started giving its studios a little more autonomy. Whether the situation is significantly better or worse for the acquired development teams is up for debate, but it's pretty rare to hear about an entire studio breaking off to become independent once again. Yet in the wake of a merger between EA's mobile developers Firemint and Ironmonkeys, the gaming world discovered that Puzzle Quest studio Infinite Interactive had quietly left its parent company back in January.

"There was never an actual acquisition of Infinite, it was more of a merger," Infinite Interactive founder Steve Fawkner explained. "It was all amicable stuff - as much as it would be fun to have a bit of a scandal. Unfortunately there isn't one."

Infinite Interactive was never formally purchased by EA, but it did merge with Firemint last year immediately before EA bought the mobile developer. Despite the circumstances, Infinite gave its unexpected partnership with EA a full year before quietly packing up its intellectual properties and moving out of Firemint's offices. Whether the time period was contractually per-determined isn't entirely clear.

EA's policy of directly managing its development teams relaxed in 2008 when John Riccitiello publicly admitted studios had been mismanaged. Since then, John Carmack and even Valve have spoken favorably of their partnerships with EA, but given the popularity of Puzzle Quest, it's likely that Infinite Interactive felt it didn't require any publisher assistance to stay afloat. "I think everybody agreed that Infinite does its best work when it's independent," Fawkner said, "and so we headed back out into the wilderness to work on our own stuff again."