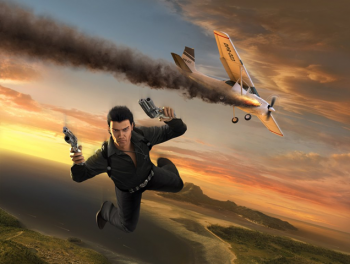 Avalanche Studios attributes its success to a refusal to rely on "crap" DLC.

As DLC becomes more and more prevalent in today's games, it's very easy to forget that it actually hasn't been part of the industry for that long. Almost all major releases of the past few years, from Batman: Arkham City to Portal 2 contain some form of DLC, eventually drying up as interest in the game wanes. For some rare titles, this isn't actually the case, as play statistics for Just Cause 2 recently proved. Despite not having a DLC release for over two years, the game still garners an impressive active fanbase, engaging over 100,000 unique players per month last March alone.

"It's the freedom," explained Avalance Studios co-founder Christofer Sundberg. "Just Cause 2 is a full-out playground for the players who want to explore and have fun for 15 minutes or 15 hours. It doesn't really matter."

What makes Just Cause 2's persistence surprising is that Avalanche hasn't been directly supporting the game for over two years. JC2 never received an official expansion, DLC updates have long dried-up, and the game doesn't even have an official multiplayer mode to warrant player interest. Yet the numbers show that the single-player game supports a respectable number of players to this day. To Sundberg, this proves conclusively that quality gameplay will always draw more players than forced online features and downloadable content.

"DLC is not needed to keep players engaged if the game is well executed," Sundberg said. "We created a game allowing players to properly explore and have fun and not focusing so much on the actual end goal of the game ... As most publishers and developers have run around as headless chickens the last three years looking for a way to make money DLC was definitively a tool to try to keep players engaged, but how many games have been truly successful with DLC? Not that many."

Sundberg did point out that there's nothing wrong with DLC in and of itself, as long as it doesn't take away from an excellent core experience. "I like DLC, but the DLC we released for JC2 was standard stuff and they haven't helped keep the players motivated to keep on playing," Sundberg said. "It was the game itself ... Proper DLC that adds VALUE is great but so far very few games have motivated me to actually pay for the DLC. I've just paid for the crap that developers decided to cut because they didn't have the time to get into the game. 'We save that for DLC' - famous last words."

Now if you'll excuse me, I'm in the mood to hookshoot a fighter jet.

NOTE: A previous version of this story stated that Just Cause 2 had a multiplayer component, which it does not. We apologize for the mistake, and any inconvenience it may have caused.