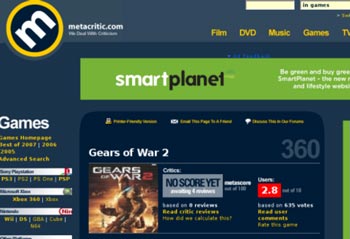 Irrational games is looking for the best of the best, on Metacritic.

The games industry takes review aggregator, Metacritic, very seriously. Not only do some publishers use it to determine how much cash should go to developers, at least one company is using Metacritic scores to screen potential job applicants.

A recent listing for a design manager position at Bioshock Infinite developer, Irrational Games, lists "Credit on at least one game with an 85+ average Metacritic review score" as one of its requirements

The listing is obviously referring to professional Metacritic scores, otherwise the position will most likely go forever unfilled.

The other requirements include at least six years' worth of game design experience, four years in management and credits on at least three games that have been completed and shipped.

Looking for staff who've worked on popular titles makes perfect sense, of course, but Metacritic's accuracy and relevance have been questioned several times before. The way it converts non-numerical review scores into a 1-100 figure, its policy of assigning numerical scores to reviews that don't already have them and the fact the site produces a weighted average (IE: Reviews from larger publications have a bigger effect on the final score) are often singled out for criticism.