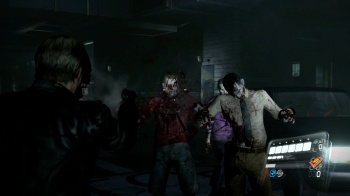 Las Plagas were a little too loco for Resident Evil fans.

For a series about zombies, the recent Resident Evil games have had an odd aversion to actually depicting the undead. Sure, there were mindless, shuffling almost-people, but they were parasites or ooze monsters, not the living dead. The upcoming sixth installment brings back the classic T-virus, leading to an outbreak of good old-fashioned brain eaters, and executive producer Hiroyuki Kobayashi knows why. The answer may not surprise you.

"We brought zombies back because they're popular," Kobayashi said with a laugh. "Everyone loves 'em, that's why we brought them back. Based on feedback from Resident Evil 4 and Resident Evil 5, the fact that there weren't classic zombies in those games and people really wanted them. We tried to respond to the requests and put them in this game."

So, with old-school zombies making a return, does this mean it's time to bust out your strategies from the early Resident Evil games? Not quite, says Kobayashi. "We've tweaked them a bit so they aren't the same zombies you would expect."

"The zombies when you first see them, they shamble around slowly," explained producer Yoshiaki Hirabayashi. "But, if they spot you or they get closer they break out into a sudden dash and try to grab you." This is a big change for the downright lethargic zombies of the original games - weaving through zombies to conserve ammo may not be an option. "Some of them will leap out at you," Hirabayashi warns. "For the most part, they are zombies, but they have bursts of energy here and there that give them a little extra oomph."

It seems the zombies' physical abilities aren't the only part of them that's gotten an upgrade, as zeds will be able to pick up weapons that they find in the world. Don't panic, though; it seems unlikely that you'll be running into any undead strike teams. "It's not that we decided zombies should use weapons per se," Hirabayashi continued. "It's just that we wanted to get across the feeling that these used to be people and people either picked up weapons when they were fighting or they used certain objects when they were alive. They have this instinctual ability to pick up these things and use them. It's not that they are purposely using weapons, it's in the back of their mind because they used to use weapons before they became zombies."

It sounds like the team at Capcom is doing their best to keep their zombies from getting too stale, though it's this unrevealed detail that seems the most interesting. What do they have planned that could make vanilla zombies more interesting than the mutating Plagas or the vampiric Ooze? We'll probably find out soon, but if not, we'll figure it out the hard way when Resident Evil 6 infects consoles on October 2.